Use of technology to improve mental health care

By Annan Boodram – The Caribbean Voice

Mental health has galloped to the fore during this coronavirus pandemic. According to the World Health Organization (WHO), one in four people in the world will be affected by mental or neurological disorders at some point in their lives. Nearly two billion people suffer from mental illnesses every year. Furthermore, those who live with severe mental illness are more likely to face chronic medical conditions and die around 25 years earlier as well as routinely suffer gross human rights violations.

While nations struggle to diagnose and service their increasing mentally ill populations, technology is gradually moving front and center in that process. In fact, one way in which mental health care is more easily and extensively accessed is through apps. But are phone users willing to use apps to help themselves and others deal with mental health issues? A survey conducted by the Journal of Medical Internet Research found that 76 percent of people would be interested in free apps, which aim to improve mental health or assist with mental health self-monitoring.

Simply searching a relevant term such as “depression”, on the App Store, produces a wide range of results. The list of such apps is far too extensive to present here, but below are a few of the more popular ones:

Calm: Appropriate for ages 4 and up, Calm is an app that focuses on meditation, sleep, relaxation techniques, and stress reduction. Its overarching goal is to lower stress levels and promote balance, self-awareness and better sleeping habits.

Moodkit: Is a mood-tracking app intended for individuals, aged 12 and up. The app is centered around the design of Cognitive-Behavioral Therapy methods and provides a space for users to journal their daily moods, emotions, and thoughts. The app allows you to monitor your mental state and subsequently avoid negative thought patterns. It also provides a platform for users to increase self-awareness and develop healthier ways to think by providing activities, guidance, and space for journaling.

Smiling mind: A mindfulness-centered app, appropriate for ages 4 and up. The app was developed by psychologists and educators, with the goal of promoting mindfulness, compassion, happiness, and balance within all age groups. It allows you to check in about your mood, meditate, and has various programs designed to target different populations. Some of these programs include sessions for adults and children, sessions focused on mindfulness in the classroom or workplace, and sport programs.

BREATHE2RELAX: Appropriate for ages 4 and up. Created by the Center for Telehealth and Technology, this app is intended to reduce stress by introducing and encouraging ways to manage stress and worry. Breathe2Relax focuses largely on guided breathing techniques to promote mental stability, but also has features which encourage you to rate your emotions or mood, and provides useful facts about the effects stress has on the mind and body.

WHATSAPP is focused primarily on helping users cope with depression by offering the basis of cognitive behavioural therapy, alongside breathing techniques and a journal to monitor thoughts and moods. The app also includes exercises to help reduce anxiety and aids in providing alternative coping mechanisms for users.

Moodpath is your pocket-sized mental health companion. Moodpath asks daily questions in order to assess your wellbeing and screen for symptoms of depression. The screening progress aims to increase your awareness of your thoughts, emotions, and feelings. After a period of two weeks, the app generates an electronic document that you can discuss with a healthcare professional. More than 150 videos and psychological exercises are available to help you understand your mood and strengthen your mental health.

PACIFICA is an app with anxiety and stress in mind. It provides a toolbox to deal with daily anxiety and stress, along with a highly supportive community of like-minded individuals. Pacifica helps you to break cycles of unhelpful thoughts, feelings, and behaviors through methods such as CBT, mindfulness meditation, mood tracking, and relaxation. The app houses audio lessons and activities that help you to cope with stress and depression, and it sets daily challenges to help you tackle anxiety one day at a time and reach your long-term goals.

SUPERBETTER is a game focusing on increasing resilience and the ability to remain strong, optimistic, and motivated when presented with challenging obstacles in life. A study by the University of Pennsylvania in Philadelphia found that when people played SuperBetter for 30 days, their mood improved, symptoms of anxiety and depression decreased, and self-belief to achieve goals increased. The app will help you to adopt new habits, improve your skills, strengthen relationships, complete meaningful projects, and achieve lifelong dreams. SuperBetter also has the potential to help you beat depression and anxiety, cope with chronic illness, and recover from post-traumatic stress (PTSD).

7 CUPS: If you are feeling lonely, sad, stressed, or worried, 7 Cups could be the perfect app for you. It provides online therapy and emotional support for anxiety and depression. There are more than 160,000 trained listeners and licensed therapists who are available to anonymously speak with 24/7. These listeners can be searched for based on their experience or their specialties, such as bullying, panic attacks, eating disorders, relationship breakups, and many more. Affordable therapy with an online therapist can commence one-to-one in a confidential setting.

Apps are not the only form of technology used to foster mental health care. Tech interventions include: 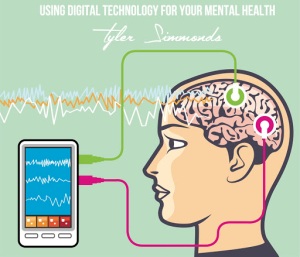 Technology is beginning to play an important role by shifting tasks performed by specialist medical providers into the hands of non-medical health workers. For example, web-based screening tools designed to be delivered on mobile phones by non-medical health workers were effective for diagnosing depression or common psychiatric disorders in clinical settings in India. As well TCV has been able to identify needs and engage in successful counseling (and direct referrals for help) to hundreds of clients through various social media, FB Messenger, what’s app. texting, emails and direct phone calls.

Another example of technology intervention is Facebook, which, in 2016, extended its suite of anti-suicide tools to users worldwide, simplifying the process for worried users to flag postings by friends who may be considering harming themselves. The mechanism allows users to flag postings by others that could hint at suicidal thoughts or plans to self-harm. Facebook’s dedicated teams will then assess the risk level indicated by the post, intervening accordingly.

As well, given the dynamic relationship between violence and mental health, in Jamaica, closed-circuit television (CCTV) cameras and a public address (PA) system have made it much easier to monitor activities and spot altercations, which can then be nipped in the bud. Mounted in the office of one principal are two large screens displaying live footage of the activities of students and staff around the compound. Several schools have installed their surveillance systems in a bid to increase safety and security. It is a move supported by Jamaica’s education ministry.

In Guyana, we have welcomed the initiative by Digicel to send out the suicide helpline contact info to all their mobile phone subscribers and we are hoping that GT&T will follow suit. We are also hoping that both carriers would start sending out awareness and prevention messages for suicide and all forms of abuse. As well we urge electronic billboards advertisers to do the same. Also, for years we have been lobbying for the government to establish a registry of sex offenders as one measure to tackle sexual abuse and we hope the government that takes power after the March elections will place this registry on its list of priorities.

In fact, at some point in the middle of this decade, the number of active cellphone subscriptions grew larger than the number of actual people on this planet, according to data from the UN’s International Telecommunications Union (ITU), the World Bank, and the UN itself. And by 2025 almost three quarters (72.6 percent) of Internet users will access the web solely via their smartphones according to a report published by the World Advertising Research Center (WARC), using data from mobile trade body the Global System for Mobile Communication (GSMA). In effect, the global population is an increasingly mobile phone user population, ideally suited to access and use apps and other related technology.

Mental health includes emotional, psychological, and social well-being. It affects how we think, feel, and act. It also helps determine how we handle stress, relate to others, and make choices. A 2018 Lancet Commission report on mental health stated that mental disorders will cost the global economy $16 trillion by 2030. The economic cost is primarily due to the early onset of mental illness and lost productivity, with an estimated 12 billion working days lost due to mental illness every year. The report also found that young people face the brunt of the global burden of mental illnesses.

Thus nations, especially developing ones, can ill afford to continue to neglect and sideline mental health, especially in an age when easy to use and relatively inexpensive technology is more and more embraced by the global population. And so TCV urges the government to budget resources for the creation of a mental health app that would provide quick and easy access to those seeking help – counseling, legal and material such as housing, financial support, job training and enable quick, easy follow up through available platforms such as email, phone, texting and messaging.

Such access would include, police, all government resources, NGOs, faith, and community-based organizations and media. Guyana has a number of talented young tech experts who can get this done and The Caribbean Voice would be willing to collaborate on this process.

In the current pandemic technology is quite possibly the only means of addressing mental health issues right now.