Alcohol is not a root cause for abuse: It’s a trigger

A commenter wrote on social media: “I told them the main culprit was alcohol abuse, reduce it and you will reduce domestic abuse, suicide, noise, drunk driving, etc,”

Response: “I totally agree. Alcohol is the root cause of all acts of violence, abuse, etc.”

Another commenter added: “Alcoholism, as one of the main causes of domestic violence has been known for ages.”

When the original poster and those who commented on his post were informed that alcohol is not a root cause of abuse but a trigger they vehemently disagreed and, instead, continued to perpetuate the long-held myth. The reality, however, is that while there have been many studies done, there is no scientific evidence indicating a cause-and-effect relationship between substance (alcohol, drugs) abuse and gender-based violence.

For some abusers, substance use (and abuse) is an excuse for becoming violent. Alcohol allows the abuser to justify his abusive behavior as a result of the alcohol. While an abuser’s use of alcohol may have an effect on the severity of the abuse or the ease with which the abuser can justify his actions, an abuser does not become violent “because” drinking causes him to lose control of his temper.

The fact is that domestic violence is used to exert power and control over another. It is often a learned behavior but is never the result of loss of control. In an abusive relationship, the batterer uses the pattern of tactics described in the Power and Control Wheel to reinforce the use of physical violence. 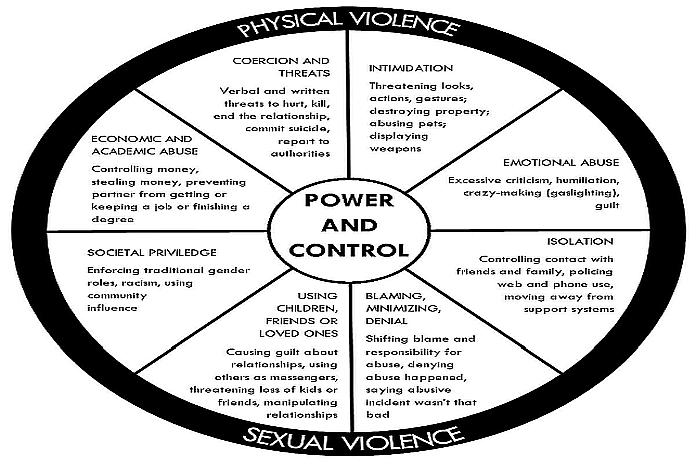 Violent incidents are not isolated instances of a loss of control, or even cyclical expressions of anger and frustration. Rather, each instance is part of a larger pattern of behavior designed to exert and maintain power and control over the victim. Research indicates that a large quantity of alcohol, or any quantity for alcohol can increase the user’s sense of personal power and domination over others. An increased sense of power and control can, in turn, make it more likely that an abuser will attempt to exercise that power and control over another.

Also, alcohol does affect the user’s ability to perceive, integrate and process information. This distortion in the user’s thinking does not cause violence but may increase the risk that the user will misinterpret his partner or another’s behavior. Additionally, substance abuse may increase the aggressive response of individuals with low levels of the serotonin, a neurotransmitter that is directly involved in the regulation of mood, feelings of relaxation, sleep, and appetite.

Research also indicates that there may be a correlation between the risk of domestic violence and certain personality characteristics. For example, alcohol abuse may increase the risk of violence in men who think abuse of women is appropriate and are also under socio-economic hardship. Furthermore, a 1991 study in the United States found that the average amount of alcohol consumed before the use of violence was only a few drinks, which “suggests that the act of drinking may be more related to woman abuse than the effect of alcohol.”

In effect, domestic violence and substance abuse should be understood and treated as independent problems: “[T]he reduction of one problem to the familiar language and interventions of the other problem is ill-advised” (Anne L. Ganley & Susan Schechter). Most important, the myth that alcohol is a cause of domestic violence needs to be laid to rest, so that the concept of gender-based violence can be understood for what it is.

This writer is one of many who witnessed first-hand that while alcohol often triggered domestic abuse, the abuse would take place even when not under the influence of alcohol. The majority (76 percent) of physically abusive incidents occur in the absence of alcohol use (Kantor & Straus, 1987). But in the post-colonial sixties, seventies and eighties, when abuse seemed to have been normative, victims seemed to have accepted the abuse as their due, often blaming themselves for doing or saying something they should not have done or said or vice versa.

In many societies this dynamic still exists to a greater or lesser degree. Several research over time in the Caribbean reveal that women feed that if their husbands don’t hit them now and then, then their husbands no longer love them. The older generation of readers will recall this calypso made famous by the Mighty Sparrow:

“What, Socrates and Plato didn’t know,

I’m gonna sock it to you in calypso.

Every now and then, cuff dem down,

Black up their eyes, bruise up their knee,

And then dey love you eternally.”

The fact is that abusers may feel this need to control their partner because of low self-esteem, extreme jealousy, difficulties in regulating anger and other strong emotions, or when they feel inferior to the other partner in education and socioeconomic background.

Some people with very traditional beliefs may think they have the right to control their partner, and that women aren’t equal to men. Others may have an undiagnosed personality disorder or psychological disorder. Still others may have learned this behavior from growing up in a household where domestic violence was accepted as a normal part of being raised in their family.

Studies suggest that violent behavior often is caused by an interaction of situational and individual factors. That means that abusers learn violent behavior from their family, people in their community and other cultural influences as they grow up. They may have seen violence often or they may have been victims themselves. Some abusers acknowledge growing up having been abused as a child.

Children who witness or are the victims of violence may learn to believe that violence is a reasonable way to resolve conflict between people. Boys who learn that women are not to be valued or respected and who see violence directed against women are more likely to abuse women when they grow up. Girls who witness domestic violence in their families of origin are more likely to be victimised by their husbands.

It must be noted also that those who are not abusers, will never become abusers under the influence of alcohol. This writer knows of many such individuals, who will, more often than not, become very amiable and sometimes funny, generous and kind when drunk and nothing can get them to become violent. Eventually they will fall asleep under the influence without hurting or injuring anyone and without any display of temper and violence.

According to a study done in 1990 (Straus & Gelles), “the majority of men classified as high-level drinkers do not abuse their partners.” Why? Because they have no desire to assert power and control.